Learn how to write, use, and publish a simple Python-based GitHub Action 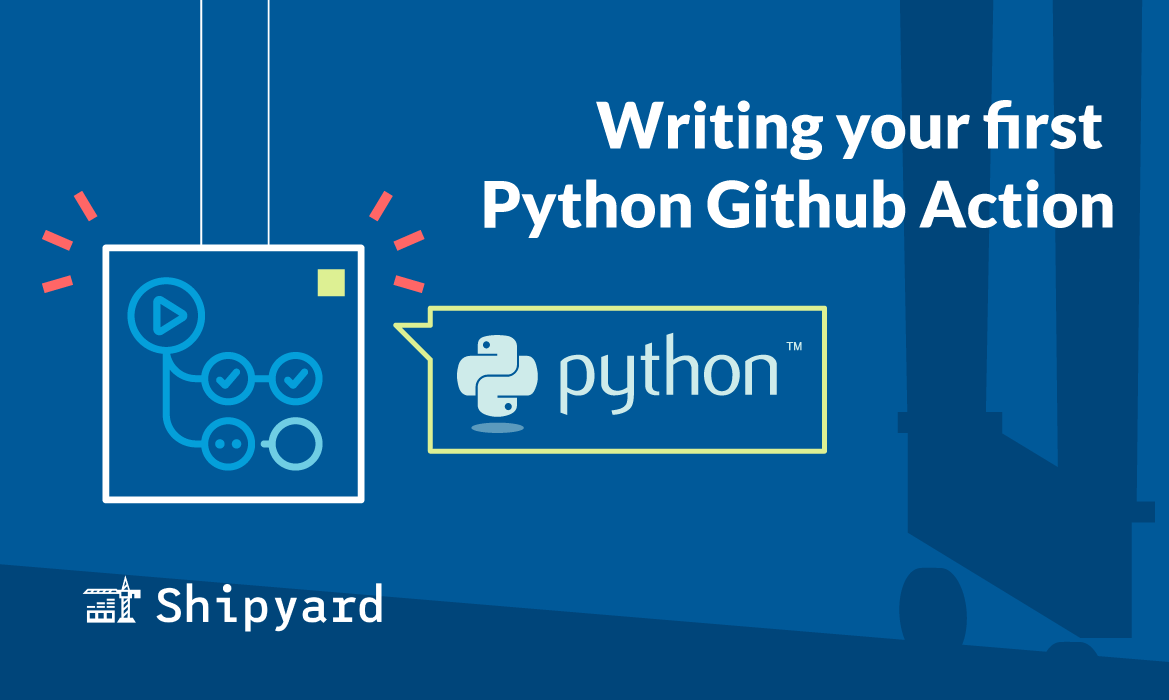 Recently, we released our official Shipyard GitHub Action, and we wanted to share our findings and experiences from creating our first GitHub Action. In this post, you’ll learn how to write a simple GitHub Action in Python.

In 2019, GitHub released its own CI tool called GitHub Actions. According to GitHub, Actions make it easy for developers to automate tasks within the software development life cycle (SDLC). The native ecosystem integration enables projects to be automated from the moment developers commit code for deployment into production.

Before looking at a sample GitHub Action, we’ll familiarize ourselves with the syntax and terminology that we’ll encounter:

Now that we’ve covered the basics, let’s start writing our first Python Action. If you don’t already have a repo, create a new public repo on GitHub. You cannot create and distribute your GitHub Action from a private repo.

Once you’ve created the repository, clone it locally and open it on your favorite IDE.

First, we need to add the most important file for any GitHub Action, namely, action.yml. This file serves as an interface for our Action and defines its inputs, outputs, and the run commands. It uses YAML syntax. You can read more about different components and configurations for action.yml here.

The action.yml always has to include:

Now, let’s create a simple GitHub Action, which will take an integer input and return the square as an output. Here is our action.yml file which we will use for our example:

Let’s go over our action.yml file. Let’s focus on the runs section since other sections are quite straightforward.

GitHub provides three options for actions: Docker, Javascript, and Composite. You can read all about the three options and which one best suits your use case here.

We started with adding a custom shell script to install Python for our Action but quickly realized that we don’t need to reinvent the wheel. GitHub provides several actions that can be used, such as setup-python, which we will use to install Python. You can read more about this Action and different capabilities, such as Matrix testing, versioning, and caching at the official documentation here.

Even though our example is pretty straightforward and we will not be installing any dependencies, we wanted to include how you would go about installing dependencies. Update the command to the package manager you are using, such as pip, poetry, or pipenv.

Pass Inputs to Shell (only valid for Composite Runners)

This was something that tripped us up when we were creating our GitHub Action. We could not figure out what we were doing wrong and had to dig deep to get to the bottom of this. There is an active issue which prevents the inputs from being injected into the runner for composite runners. As a workaround, we will manually inject the environment variable. You can read about the issue here.

And lastly, we will run the Python script. Let’s quickly write this Python script and test everything out. Create a new folder src and add a new file get_num_square.py, which just sets the output to the square of the input number.

Now that we have all the pieces ready, let’s add a workflow to our repo and add the new Action as a step. Create a new workflow in the .github/workflows directory.

Commit the new changes and head over to the Actions tab to view the runners in action.

We can verify that our output is correct. We passed 11 as an input argument and can see 121 in the Action’s output.

Once you have verified the GitHub Action, you can release it by clicking on the Draft a release button as shown in the screenshot below.

People can start using this new Action in their workflows all across GitHub once it has been successfully released.

As you can see, GitHub Actions are pretty simple to set up and can empower developers to do amazing things. GitHub Actions has a very strong community of developers with several templates of prebuilt Actions, examples, and workflows so you don’t have to start from scratch. Hope this helps you create some great GitHub Actions. Let us know how the process went and what you ended up creating. Happy coding!